Plagued with warfare and insurgencies, the Middle East today is home to some of the largest protracted and soontobe
protracted refugee groups. In protracted refugee camps, architecture falls acutely short of its premise to provide shelter and comfort. Building upon the challenges and opportunities discerned from existing Palestinian refugee camps in the region, this work delivers a 220-page written framework and a pilot design to equip the UN and other organizations with planning approaches, construction options, and design strategies for establishing new and improved refugee settlements in the region. Shifting from a pessimistic to optimistic stance, we view the momentum of displacement dynamics (populace, aid, advocacy) as a development opportunity. As such, we propose a mutually beneficial system where the camp becomes an orchestrator of physical, digital, and economic systems to provide in the short term thriving living hubs for refugees, and in the long term, seeds of economic and social development for the host communities. You can preview 72 out of the 220 pages through the ISSUU embed above.

*images are courtesy of RAD and Studio n-1

IM Blanky is a computational fabric panel comprised of tilt sensors inter-weaved as a grid on fabric in geometrically interesting patterns. Accelerometers and embedded sensors detect the tiniest motions, allowing vital signals (heartbeat, temperature, and breathing) to be remotely monitored and stored for clinical analysis. It could also self-model its shape and function as a 3d scanner using tilt information.

Between the summers of 2011 and 2014, I participated in designing, testing, and building two IM Blankys. The first one, IM Blanky 1, was passive, meaning that its fabric surface did not have any type of pre-made accelerometers. Tilt was instead detected using free-flowing metal tassels affixed at the center of each flower. Whenever a tassel hit a petal (made of conductive threat), a change in resistance was detected and tilt was determined in software using some calculations. The blanket caused a stir after its exhibit at  Stitches – Suzhou Fast Forward because how could something so pretty be so powerful? Admittedly, it was not as powerful as we had hoped. The tassels kept getting stuck by petals and loose threads, and in certain positions, tassels did not interrupt the current running through the petals enough to detect a change in resistance. So in 2012, I became the lead developer for IM Blanky 2. It was more digitally advanced, albeit less attractive. I spent weeks and weeks trying to make it work just using conductive thread, to no avail. So we gave in and used LilyPad Accelerometers and real wires, with the intention that engineers can make the technology less invasive once we had a well-functioning prorotype. I also implemented an interactive user interfaces to visualize and analyse the sensors’ data. IM Blanky 2 underwent rigorous testing at the Department of Occupational Therapy Home Lab (University of Toronto), and was found to be effective in detecting breathing patterns especially sleep apnea. Given its passive operation and attractive design, the home lab has integrated the blanky into a suite of tools to measure long term sleep patterns and their correlation with health and wellbeing. Despite the encouraging results, further testing ceased when the PhD student/post-doc accepted a scientist position in Ottawa. Around that time (August 2014), I started my M.Arch thesis on refugee camps so I no longer had the time or interest to do more software/hardware development.

*images are courtesy of RAD and Studio n-1.

While green roofs and walls have become common architectural features, ceiling tiles remain as undisturbed, under-utilized zones. This project augments standard Tbar drop ceilings tiles with moss culture for healthier and richer interiors. The tiles are wirelessly connected to their neighbors and linked to the Internet. They report individually on their status (moisture and pH) and together on ambient environmental conditions (temperature, ambient light, humidity, C02). It is envisioned that tiles in a given space can join other networked moss communities around the globe in an ecosystem of live correlated data whose feedback serves their resilience and sustainability. My role in this project was to link the moss tiles to the internet and display their live feeds on a web page that is now offline because the tiles have been dismantled.

In slums and long term refugee camps, resource scarcity manifests in many ways, one being the squalid environments where homes, schools, streets, and clinics are of substandard quality. A wide body of existing research suggests that such environments negatively impact both the health and overall wellbeing of inhabitants. But how bad are such environments? Where do they fail the most? Do they exhibit any positive traits? Can their quality be measured in ways other than health or satisfaction indicators? Is it possible to visually represent such qualities? And can it be captured through a set of simplified benchmarks?

The objective of this project is to address the aforementioned questions by devising a strategy to measure the quality of the built environment in substandard contexts in order to fathom its impact on health and wellbeing and provide a checklist for architects, planners, aid agencies, and policy makers for future construction and renovation. Our method proposes the Circle of Health, a set of 115 indicators in the form of yes/maybe/no questions encompassing the major built components that occupants interact with daily, organized in a concentric sunburst diagram. Each answer is color coded (yes is green, maybe is orange, and no is red). Colors for each component are summed up to generate a hue indicative of the overall quality of the space surveyed. The meaning of the three colors/overall hues is:

Using primary and secondary sources, we applied the indicators to three Palestinian refugee camps in Lebanon. We found expected and unexpected results. For example, the worst parts of the camps are the house and street, the schools and clinics are mediocre (due to recent renovations), while the neighborhood is the only positive aspect about the built environment in the camp (more green hues). The quality of vastly complex environments can be captured in the Circle of Health through a simple set of benchmarks to be satisfied when building long term refugee camps or renovating slums to improve occupants’ health and wellbeing.

The Circle of Health can be integrated within the planning, construction, and public health divisions in cities, NGOs, and the UN as a simple yet condensed checklist for structuring renovations and improvements for slums and long term refugee camps. Moreover, it can be used to find where the austere conditions, restrictions, and haphazard interventions leave their mark on the built environment to inform the specs of improvement interventions needed. 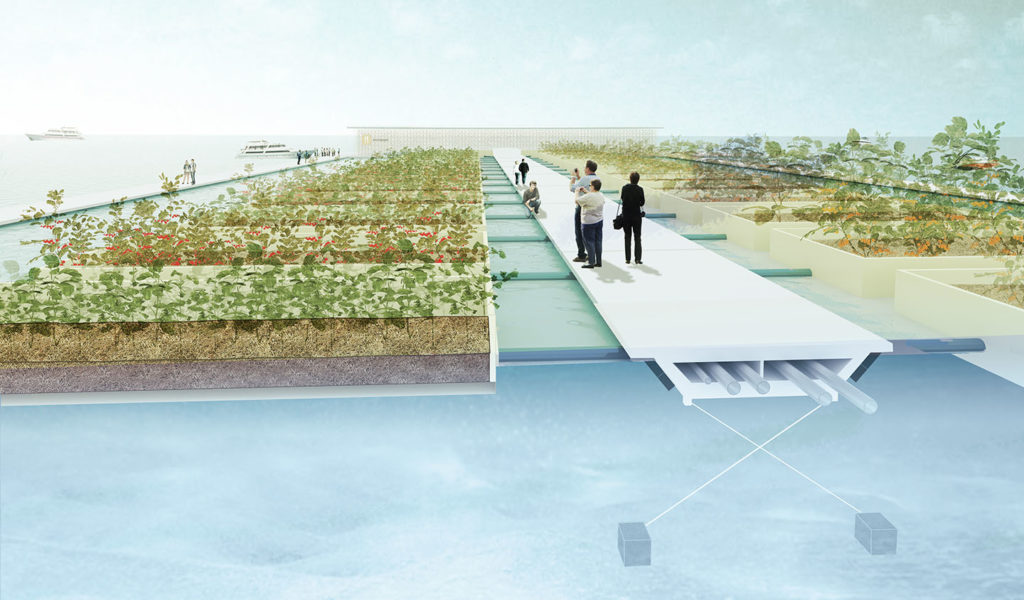 Large coastal cities such as New York, Tokyo, and Dubai attract and foster global investments while being less conservative in adapting cutting-edge technological innovations and progressive urban practices. Hence, they are in a sense, future cities that will continue to grow and bear economic/social/political importance for at least the next few decades. But the next few decades cannot be premeditated without considering the infrastructure crucial to sustaining the livelihood of the-ever-increasing population in these cities. Aging infrastructure, natural disasters, and population growth will escalate failure probabilities in food/power/water provision systems. Hence, access to critical services in such cities will certainly be insufficient. At the same time, the future cannot be speculated with much certainty either. Will rising sea levels push settlement further inland? Will we see the rise of pencil towers? Will demand grow at a rate faster than the rate at which new infrastructure is added? And will more tsunamis hit? No definite answers to these questions exist yet. Therefore, either such cities will continue to exist, hence necessitating the demand for constantly expanding infrastructure. Or, they may relocate/shrink/cease to exist, hence, defying the rationale of building permanent infrastructure.

As architects, landscape architects, and urban planners, we can face both demand and uncertainty through smart design that is sharable, resilient, and mobile. In case of coastal cities, water provides the ideal medium to construct a food/energy/water generation network with the above characteristics. In addition to providing auxiliary support to the existing infrastructure, such network will exhibit several advantages. First, it is need based; more components can be plugged in/dispatched as demand fluctuates. Second, the network can be transported to a safe place in the case of disasters. Third, similar to a demand and supply equilibrium, different municipalities, regions, or countries will experience peak demand at different times. Hence, components and cost can be shared and transferred.

The network we propose in this project, after research based on Florida Keys, consists of a zoning code for the waterscape, an armature (floating docks) that interfaces with the open city, and a group of components (floating units) that hook into with the armature to generate food, energy, and water. But how could the spatial allocation of such activity on water be determine? Well, we developed a zoning code generator using GIS data and community criteria as input, with variables including land proximity, wind patterns, desired activities, benthic habitat, boat traffic, and others. A computer code then outputs detailed zoning maps allocating the appropriate use (energy generation, food production, traffic, swimming, etc…) for every square inch of a given water body. Overtime, as demand changes, as more intelligence about the network is gained, or as factored are adjusted, the zoning map is regenerated and the armature and components get repositioned/augmented/transferred. The component type and design can be chosen as to create interactions within the network while generating destinations for the community. The inhabitability aspect of the network extends the coastal city beyond its hardscape borders and celebrates rather than conceals this vital network.

Excessive relative humidity in slum and refugee camp dwellings causes multiple adverse health outcomes. Al Khayma al Sehya is a project I initiated and led. The project proposes an affordable, feasible, and socially responsible solution to excess humidity through a special fabric hung on the ceilings or walls to shield occupants from existing mold and mildew build up while absorbing excess ambient moisture and preventing its accumulation in the house. This project utilizes desiccant filled fiber tubes which local women can weave into synthetic yarn with guidance from Canadian expertise. Through this project, I initiated the first (or maybe second) collaboration between the Faculty of Architecture and the School of Public Health at the University of Toronto. Of over 600 applications, Al Khayma al Sehya was shortlisted for the Grand Challenges Canada Stars in Global Health Stage II due to its “boldness, innovation, and excellent integration of social entrepreneurship, business, and health aspects.”

Tables and Graphs are effective visualizations for presenting data. However, generating them in wiki pages requires time, effort, and complicated syntax. This becomes more problematic if you have large sets of data, or if you want more customized visualizations. Hence, I decided to make vizExpress to support computational scientists as they develop scientific c software, document their findings and share their results with others.

vizExpress is a Mediawiki extensions that allows users to create highly customized tables and graphs quickly and easily. vizExpress features a simple, excel-like wizard that can be accessed through a button in the editing toolbar. When you start the vizExpress wizard, you can:

Once you have the graph in your wiki page, you can:

Here’s some praise for vizExpress.

CAD Presenter is an Infrared and Bluetooth powered wireless glove that can be used to interact with common drafting software such as in AutoCAD to perform frequent commands such as rotate, pan, zoom, and change views using intuitive gestures. The glove is targeted for performing architecture presentations to showcase digital building models in a more fun, polished way. While the glove idea might seem obsolete today, I developed this back in 2010, 3 years before xbox was released, using Nintendo Wii hardware and Autodesk ObjectARX programming environment with C++, C#, and Lisp.